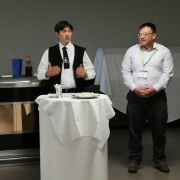 Besides all information and knowledge exchange, I will write about this later, it was very special to meet each other as brothers and sisters. Completely different cultures, languages, backgrounds and traditions but with the same desire; ‘God and young people’. And again I was impressed by the ‘service in collaboration’, the way in which fellow youthleaders visit each other and serve the ministry of the other.

During such an international conference you take some distance from your own situation, your own country and culture. This sometimes gives very clear insights into ‘the way we do things around here’, as a nice description of culture. Especially if you can compare that with other cultures and when other cultures reflect on typical Dutch behavior. A well-known phenomenon is the ‘immediacy’ of Dutch people who are often perceived as clumsy or inappropriate in other cultures. But over the past few days I have heard three times an experience of individuals about ‘cooperation’ with Dutch people. And the conclusion was that it was pretty difficult. As a Dutch we are usually good at networking so it surprised me a lot. But when I heard the experiences, I understood it better. Because in various situations it appeared that the interests, the added value for the Dutch were decisive for the cooperation. Usually focused on realizing added value for their own agendas or plans or ‘selling’ their own method, vision. The goal was known and the networking was determined by realizing that goal. But working together is deeply believing that you have been given to each other to achieve a common goal. And these signals prompted me to ask ourselves if we would not deprive ourselves of the opportunity to see what God wants to do through the other? Do we ‘calculate’ too much in our networks and therefore sometimes forget to really work together?

Therefore, a number of examples that I have heard or experienced these days. And it starts with the question ‘What do Latvia and Northern Ireland have in common?’ As far as I know not very much, and yet a special collaboration has started in an incomprehensible way. A youth worker in Latvia who did not know how he could be of significance to the youth in his country found a book in an office where he happened to be, triggered by the title. In an inexplicable way he opens the book on page 3, read here the name of the leader of a youth organization in Northern Ireland from which he has looked up the contact details. And so an email arrived in Northern Ireland where the question from Latvia was a confirmation for this organization. And so there was a nice cooperation that is now of great significance for young people in Latvia. For me a special lesson that God can have a plan that is not consistent with our calculations or logical collaborations.

During one of the Bible studies we have considered Daniel and the way he lived at the Baylonic court. Daniel was willing to enter into relations with his enemies, the people who had taken him away from his own country. And he talks about the rules for eating and drinking and, together with those in charge, looks for a solution. And when Daniel went to the king to explain the dream and its meaning, he first went to his friends. For Daniel knew that he needed others, that his friends should pray for him. That raises the question for me whether we dare to be dependent on others and ask our friends to pray for us and accept that they also ask questions or provide feedback.

At the conclusion of the conference we celebrated Holy Supper together, Holy Communion as celebrating the community of saints. This was led by a pastor from Romania who studied in Kampen and was a minister at a Reformed Hungarian church. He did this together with a Baptist pastor from Romania. A meaningful experience because in this moment so many gaps were bridged. Those who know history a little bit know how complicated the relationship is between Romania and Hungary. And the traditional Hungarian church has a very different tradition than the Baptists. And I was very impressed with how this friend, we met before in the Netherlands, with respect for his own tradition, used new forms that had meaning. This was also an example of how the gap between generations or traditions can be bridged. After celebrating Lord’s Supper we all got a stone with our name on it. He collected them, together with his wife, at the beach in Spain. This stone with our name was a sign that we are part of God’s temple. Small and insignificant in itself but necessary as a stone to build His temple together.

Why don’t you do research?
Scroll naar bovenzijde

We may request cookies to be set on your device. We use cookies to let us know when you visit our websites, how you interact with us, to enrich your user experience, and to customize your relationship with our website.

Click on the different category headings to find out more. You can also change some of your preferences. Note that blocking some types of cookies may impact your experience on our websites and the services we are able to offer.

These cookies are strictly necessary to provide you with services available through our website and to use some of its features.

Because these cookies are strictly necessary to deliver the website, you cannot refuse them without impacting how our site functions. You can block or delete them by changing your browser settings and force blocking all cookies on this website.

We also use different external services like Google Webfonts, Google Maps and external Video providers. Since these providers may collect personal data like your IP address we allow you to block them here. Please be aware that this might heavily reduce the functionality and appearance of our site. Changes will take effect once you reload the page.